Foie gras - French for "fatty liver" - is the diseased and enlarged liver of a duck or goose, produced through force feeding.

What is Foie Gras?

Foie gras - French for "fatty liver" - is the diseased and enlarged liver of a duck or goose, produced through force feeding.The Animal Protection & Rescue League has investigated all three US foie gras farms and several in France and found rampant cruelty to be the norm. Compassion Over Killing sent an investigator to the largest US farm, Hudson Valley Foie Gras, on a guided tour with a hidden camera and also witnessed the standard cruelty that is required for foie gras production. 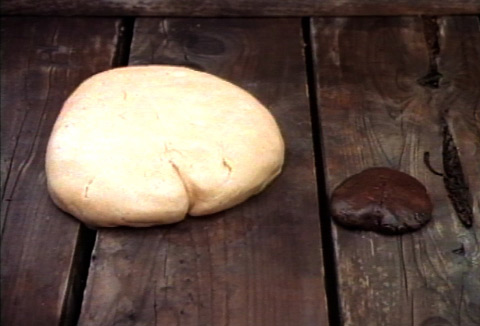 Two to three times a day, a worker grabs each bird, shoves a long, thick metal tube all the way down his throat, and an air pump shoots up to two pounds of corn mush into his esophagus.  The industry always refers to the dry weight of the feed, which is about one pound per feeding.  Adding oil and water doubles this weight, making it 20-30% of the bird's healthy body weight.  Picture 30 one pound boxes of dry pasta and then add water. This is proportionally how much a 150 pound human would be force fed using this formula.

A duck's liver naturally weighs around 50 grams. However, to qualify as foie gras, the industry's own regulations require ducks' livers to weigh an absolute minimum of 300 grams.

The vast amounts of feed pumped down the ducks' throats causes enormous internal pressure, and the pipe sometimes punctures the esophagus, causing many to die from choking on the blood that fills their lungs. Some birds literally burst, choke to death on their own vomit, or become so weak that they are unable to fend off rats from eating them alive. Other ducks die a slow, painful, and premature death by suffocation from inhalation of regurgitated feed. In fact, because of the massive toll taken on the birds during the force-feeding process, the average pre-slaughter mortality rate is up to twenty times higher than on other duck factory farms, according to the European Union's Scientific Report on the subject.

According to the ASPCA, "The birds' livers become so enlarged…that according to documentation by veterinarians, the animals must experience unspeakable pain and suffering. Birds have literally exploded from these forced feedings. The results of necropsies on dead birds that have been force-fed reveal ruptured livers, throat damage, esophageal trauma, and food spilling from the dead animals' throats and out of their nostrils."

In addition to enduring force-feeding, the birds also suffer the same neglectful and abusive treatment of other factory-farmed animals: overcrowding, mutilations (the ends of their beaks are cut off), having all their natural instincts and desires--such as interacting in social groups, mating freely, keeping themselves clean, nurturing their young, exploring their surroundings--thwarted, and eventually being sent to a violent death by slaughter. Throughout the weeks of force-feeding, the birds are kept in either a group pen or an individual cage with only wire or plastic-mesh floors to stand and sleep on.

To make matters worse, the ducks and geese are housed without access to swimming water even though ducks need to be able to immerse themselves in water to remain healthy. Access to water on these farms is so limited that the ducks cannot adequately clean their nostrils and eyes, which can lead to blindness.

This is all for an overpriced, unhealthy appetizer that anyone can do without.  Please navigate this site to learn more about this issue and what you can do to end this barbaric practice.

Hudson Valley Foie Gras and Labelle Farm violate state and federal labor laws in their exploitation and abuse of migrant farmworkers, including sexual abuse and molestation of female workers by managers at HVFG’s farm, where hundreds of the migrants live in squalid conditions. These facts have been documented in the media over the years, and Labelle settled a class action lawsuit brought by employees who were not being paid or treated properly.

In the beginning of the video, a female worker describes the sexual abuse perpetrated by her bosses at HVFG. At 2:20 in the video, a local priest describes how owners Ginor and Yanay fired all the migrant farmworkers and brought in new ones when they complained about illegally low wages and other labor violations. The workers had nowhere to go, and the local church had to house them in their basement. At 8:40, Senator Espada confronts HVFG manager Marcus Henley directly about the sexual abuse of workers occurring at HVFG. Henley responds by calling the police and screaming at Senator Espada to leave HVFG’s property.

Force feeding ducks and geese requires enormous amounts of grain. During the force feeding period alone, they are fed up to 1 kg (2.2 lbs) of genetically modified corn per day. Over a three to four week period, this amounts to consumption of up to 20 kg (44 lbs) per bird. Multiply that by the approximately 500,000 ducks and geese who are force fed to produce foie gras in the US annually and the result is an industry that requires 10,000,000 kg (22,000,000 lbs) of grain every year.
‍
The process produces a diseased liver that weighs 600-1,000 grams and is composed almost entirely of fat. There is virtually no nutritional value. Given the amount of grain required to produce this small amount of unhealthy food, foie gras represents the opposite of sustainable agriculture. 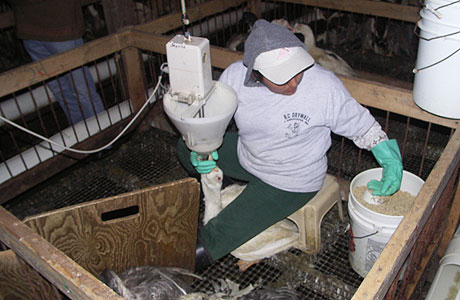 Foie gras farms are a form of factory farming and produce many of the same environmental hazards, including massive amounts of manure and slaughter waste. Hudson Valley Foie Gras, which provides most of the foie gras purchased by US restaurants, has a terrible record of polluting. The farm was fined recently by the state of New York for 800 violations of environmental law. In 2010, the Humane Society of the United States successfully sued Hudson Valley Foie Gras for releasing unacceptable amounts of chlorine, ammonia, and fecal coliform into the Middle Mongaup River in Ferndale, New York. Like other forms of factory farming, foie gras production harms the environment by producing excess waste that can potentially flow into crucial waterways.

It is bad enough that foie gras production requires ducks to be cruelly force fed. Making matters worse is what they are being force fed: corn. Given current production techniques, corn is wasteful of resources and harmful to the environment. Growing corn involves inefficient water usage, affects sensitive land areas and causes pesticide runoff. According to one estimate, 20% of corn was grown on land designated as highly erodible. Furthermore, environmentally-friendly crop rotation is no longer being implemented because of pesticide use and machine irrigation.

The chemicals used in corn production negatively impact the environment:

Any boom in corn production increases the use of fertilizer, which subsequently increases runoff. More runoff lessens a waterway’s ability to filter out chemicals and sewage that may enter the water. It is predicted that nitrogen pollution in the nation’s largest watershed, the Mississippi riverbed, will increase 34% by 2022 if there continues to be a boom in corn production.

Corn production requires a lot of water. That is because 7,000 to 8,000 gallons are lost daily from water evaporation in the corn. It takes corn 55 days to fully mature, and corn needs to be watered more often because it grows with short, shallow roots.

The production of foie gras, which requires force feeding ducks massive amounts of corn, makes worse many of the most challenging environmental problems we face.

Foie gras is a diseased liver and is loaded with saturated fat and cholesterol. Dr. Michael Greger found that "microscopic infectious protein fibers in foie gras may trigger and accelerate a variety of serious human diseases in susceptible individuals via a 'mad cow disease' - like mechanism." The full report, which was published in International Journal of Food Safety, Nutrition and Public Health, is available here.

A collaboration of researchers found deposits of amylodosis - a group of potentially fatal diseases - in commercially available foie gras. A report on their findings, which appear in Proceedings of the National Academy of Sciences, can be read here.